2022-09-16
The full name of OSB is oriented strand board, which translates into Chinese as directional structure planing board. It is a kind of synthetic wood.
The scientific name of "OSB",the source of "OSB", is Oriented Strand Board (OSB), which is a new type of board from Europe and developed rapidly
internationally in the 1970s and 1980s. Its productionprocess is the same as that of particle board, but it is also different. The similarities are that both
of them are boards made of crushed and sliced wood and pressed with stone glue for children. The difference is that the size of the flakes is slightly
different from the number of layers paved. The flakes of ordinary particle board are relatively small, with a 1mm balance layer sandwiched between the
top and the bottom, and a particle structure layer in the middle. A total of three layers of OSB are paved, while five layers are paved.The coating makes
the structure more complex, Every performance is also better. OSB board is a kind of directional structural board, which s made of small diameter wood,
thinning wood and wood core by processing long shavings (generally 40-100 mm long, 5-20 mm wide and 0.3-0.7 mm thick) with special equipment
through degreasing, drying, sizing,directional paving, hot pressing and other processes. 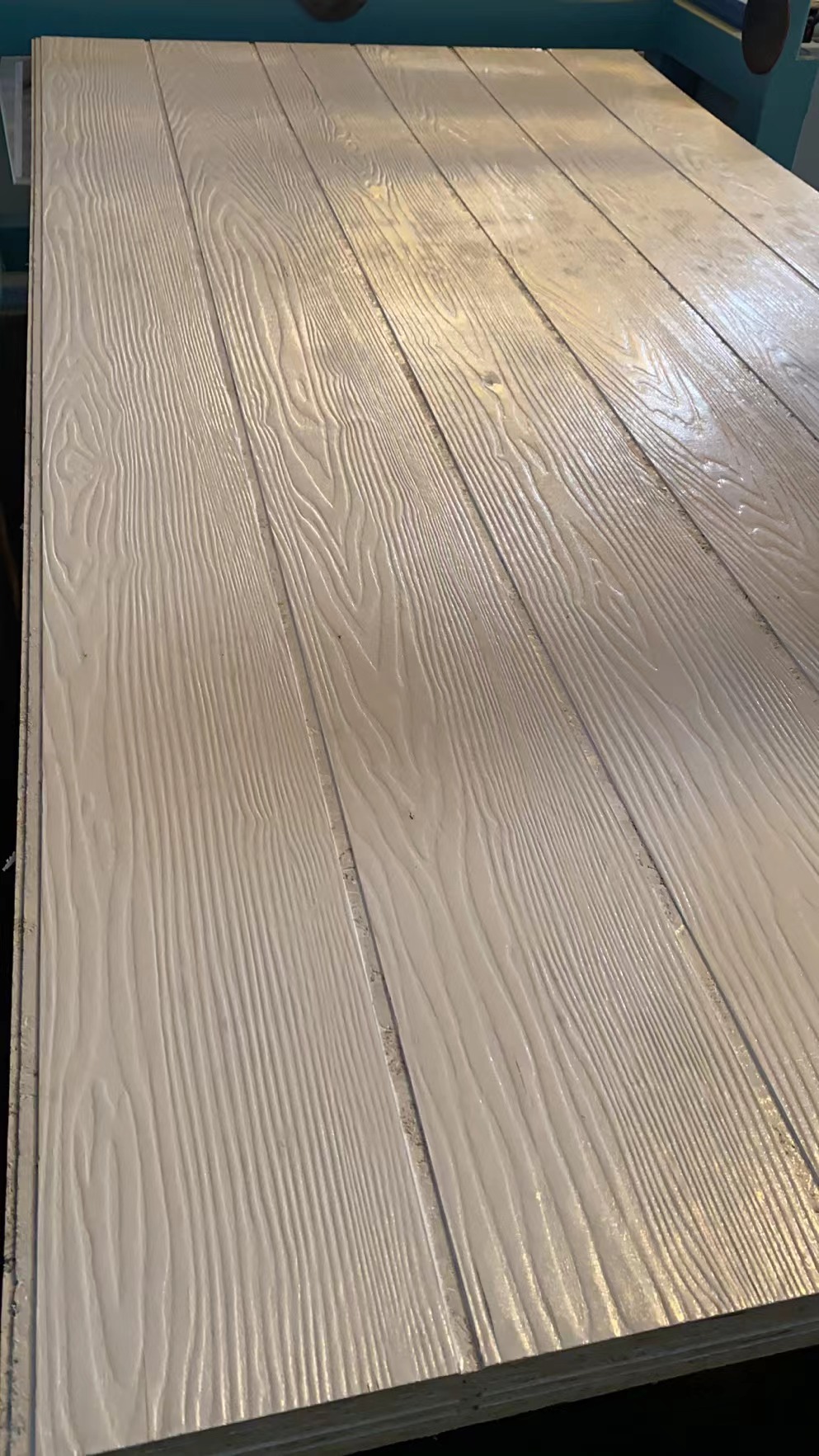 smart osb a kind of exterior wall panel.We are the first company to develop smart osb in China.
After years of research and development, we have successfully reached mass production.

The surface plane pieces are arranged longitudinally, and the core plane pieces are arranged transversely. This crisscross arrangement
reorganizes the wood texture structure,completely eliminates the influence of wood internal stress on processing, and makes it particularly
easy to process and moisture-proof. Because the OSB is a directional structure inside,without joints, gaps, cracks, good overall uniformity,
and high internal bonding strength, it has a super nail holding ability that ordinary plates can not match, no matter in the center or
at the edge. At present, there are two kinds of OSB: domestic and imported. There is no difference in quality. In terms of price, domestic OSB
has more advantages. OSB also has another name, Ousong Board. The application of Ousong Board in furniture has been developed
unprecedentedly.Many large furniture enterprises have begun to use "OSB" to make furniture.

The reason why OSB is popular with consumers is that it has no formaldehyde emission, is sturdy and durable, and is lighter and smoother than
furniture made of MDF. Please note that it is completely different from Ossoon board. Ossoon board is a directional structure, while chipboard and
Ossoon board are density boards. Don't mix them up, or they will be ridiculed as amateurs. OSB is favored by consumers because of its good stability,
high hardness,high flatness and strong nail holding force. In home decoration, OSB can not only make all kinds of decoration substrates, but also make
wall panels and whole house customization, which is widely used.

OSB board, also known as Ousong board, is a kind of synthetic wood and artificial board. The OSB board originated in Europe in the 1970s and 1980s.
OSB boards can be prosperous for decades and will not be replaced by new types of boards, which naturally has its impressive characteristics.
However, domestic users contact the OSB board relatively late, that is, in recent years. 1、 The OSB board can release no formaldehyde. The reason why
OSB board can release formaldehyde free is that it relies on the MDI glue without formaldehyde and the process flow without contacting formaldehyde.
OSB board is a directional structural board made of small diameter wood, thinned wood and wood core (wood itself contains trace formaldehyde,
which can be ignored), which is processed by special equipment into long shavings, and then processed by drying, sizing, hot pressing and other processes.
The adhesive used for OSB board is quite different from that made from urea formaldehyde resin. MDI glue does not contain formaldehyde, so do not worry
about formaldehyde release, and reject formaldehyde from the source; MDI glue is insoluble in water and layered when meeting water. It is waterproof and
moisture-proof effectively and can be used in kitchen, toilet and outdoor materials; High stability and safety of MDI raw materials; This is one of the reasons why
OSB boards are trusted by consumers. Of course, not all adhesives used by enterprises to make OSB boards are MDI adhesives, but the adhesives used by Millennium
Boat's OSB are MDI formaldehyde free ecological adhesives imported from the United States, which do not produce any substances
harmful to human health, such as formaldehyde, to a greater extent to protect the safety of users. 2、 OSB board has good stability, strong grip and wide use.

These characteristics of OSB board are due to its raw materials and technology. The board has small linear expansion coefficient, good stability, even wood, and strong screw
holding force. OSB plate is a kind of directional structural plate. Its longitudinal bending strength is greater than that of the transverse, so it can be used as structural materials
and stressed members. In fact, OSB boards are widely used for floors, walls, roofs, packing boxes, goods pallets, etc. Of course, OSB boards processed by some special processes
can replace other man-made boards. Perhaps your desk for office and study is made of OSB boards of Millennium Boat. The OSB board has many advantages, but its domestic
production capacity is not as good as that of Europe and the United States. There are not many manufacturers. However, with the equipment of domestic manufacturers becoming
more and more perfect and the process updating and iteration, the green and high-quality OSB board will gradually replace other environment-friendly man-made boards,
eliminating the potential indoor pollution.